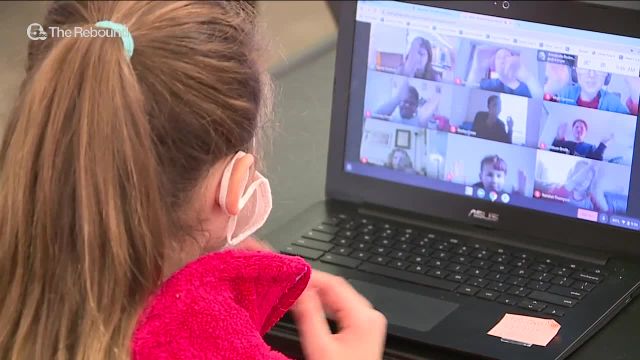 According to reports from the Richland County Juvenile Court, 440 students were reported for truancy during the first semester of school, meaning they missed too much school or fell way behind on work.

MANSFIELD, Ohio — The brutal balancing act families are facing isn’t new. Teresa Alt Executive Director, of the Richland County Youth and Family Council, says parents are forced to ask themselves, “am I going to, you know, stay home and make sure my kid gets online, or am I going to go to work so I can pay the bills?”

It’s the same one Chris Hershberger saw his parents ask themselves and experience when he was a kid.

“I was one of those at-risk kids here in Mansfield,” he explained. “A kid with too much time, not a lot of structure, could pretty much do whatever I wanted on the street and you know violent household.”

He is now witnessing the cycle repeat itself as an adult and martial arts teacher. Only now COVID-19 has worsened the struggles he once knew.

“I give the kids that are here a lot because I can’t imagine the challenge that would be psychologically,” Hershberger said. “If I was on online schooling, I would’ve never finished anything.”

That’s the harsh reality a record number of children in Richland County are living.

“Some of them have been out of school since March, probably weren't doing a lot of the work in March, April and May,” Alt explained.

According to reports from the Richland County Juvenile Court, 440 students were reported for truancy during the first semester of school, meaning they missed too much school or fell way behind on work.

Last school year, there were 408 reported for the entire year.

Alt explained if a student isn’t going to school or logging in remotely, the school is required to reach out to the family. If that doesn’t work a referral is to the juvenile court. If there’s still no signs of improvement, the student and their family are ordered to face a judge. Alt says this process is becoming more common to students who have never been through the court system.

“It really is taxing the resources,” she said.

So, Alt and a team of community partners created what they call the learning pod program, which was approved and funded by the county. The idea is to give court referred kids resources and motivation to go to school and catch up on missed work.

“It’s a complex program. They put a rush on it. They did a good job and we’re ready to roll, said Tony Vero, Richland County Commissioner.

At least four pods have been set up inside various properties, including Hershberger’s gym called “Black Belt Pro Fitness.”

“They start with their academics for about 90 minutes and then we pull them out and we start getting into yoga, stretching, exercise,” Hershberger said. “We’re trying to make it enjoyable from a learning perspective.”

The transformed business owner is now helping other at-risk kids do the same, while also helping their parents overcome the balancing act of survival.

“Back then I never would’ve thought it was possible, but you know now I can sit down with a student and say hey, look this is possible you just gotta really follow your dreams and work hard,” Hershberger said. “I just offer them the idea that there’s hope.”